Skip to main content
Home / Q&A: What will happen to unclaimed PPI provisions after the deadline? 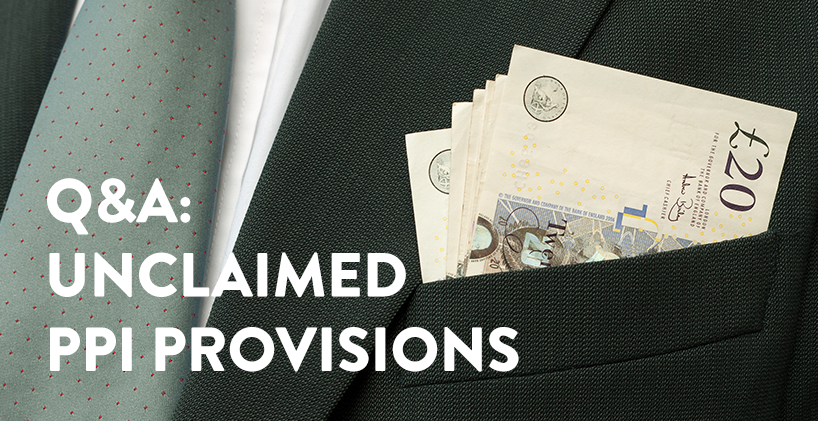 Q&A: What will happen to unclaimed PPI provisions after the deadline?

In our recent blog post we told you about £9bn set aside for PPI compensation at risk of going unclaimed, unless more people check their finances before August’s deadline.

The Financial Conduct Authority (FCA) are hoping to ‘bring the PPI issue to an orderly conclusion’ – but what happens after the 29th August 2019 if those who were put off checking were actually mis-sold and some of those provisions are not utilised?

With no regulatory requirement for firms to proactively contact mis-sold customers, and no official statement from the major lenders, no one really knows for sure. But it seems safe to assume that the leftover money will simply be absorbed back into profit margins.

So how has this situation come about? Why should the banks be able to keep this money which was earned by nefarious means? And can the situation be prevented?

Why has so much been set aside?

Lloyds Banking Group broke ranks from an appeal by the British Bankers’ Association (BBA) back in 2011 to kickstart the repayments due to millions, with rival banks following suit shortly afterwards.

Other firms from across the finance industry then added to the bill having sold PPI alongside many loans, credit cards, mortgages, overdrafts, store cards, catalogue credit and more, and in recent years millions more have complained about PPI even if it was sold correctly thanks to Plevin guidelines surrounding commission levels.

That’s because the average level of commission on PPI policies was an enormous 67%, meaning more than two thirds of PPI premiums actually went to the back pockets of lenders and brokers.

Lenders have consistently underestimated the sheer scale of the PPI issue - Lloyds for example have increased their provisions 19 times despite repeatedly insisting they had done so for the final time.

So why hasn’t more been claimed back so far and why is so much set to go unclaimed?

Current provisions across the industry stand at a massive £46.5bn according to New City Agenda – that’s enough to have staged the London 2012 Olympics 5 times over.

Complaint numbers have steadily risen as the scandal has gone on and are currently at a four-year high, with the Financial Ombudsman Service (FOS) seeing the majority of their work in recent years involving PPI cases.

Despite this the amount of money returned to consumers has fallen in recent years, as PPI claims became associated with negativity such as cold calling and spam texts from unregulated firms.

One of the main ways in which PPI was mis-sold was that the policy was added to the customer’s finances without them even knowing, or added despite them declining the cover.

As such many people were not even aware they ever had PPI attached to their finances, and therefore did not think they had a case to complain about.

But thanks in part to consumer champions encouraging people to check, and an awareness campaign run by the FCA, complaint numbers are rising and payout amounts are increasing again.

November last year showed the highest monthly payout total for 19 months, and each of the last four quarters have shown more than a billion pounds of redress paid out for mis-sold PPI.

Lender provisions still far outweigh the amounts being paid back though with more than £9bn set to go unclaimed when August’s deadline passes, based on current figures.

If they’ve admitted this money was earned through mis-selling, why will lenders potentially get to keep these unclaimed provisions?

This is a good question, and one which neither the banks nor the regulator have provided an answer for.

Whilst consulting on the idea of the deadline the FCA heard from consumer groups and the Claims Management industry that millions would have no idea whether or not they ever paid for PPI, and as such bringing in a deadline without forcing the banks into any kind of proactive investigation would effectively leave those customers worse off.

In response, the FCA said: “We still do not agree that, because the majority of PPI policies have not been complained about, the deadline is premature or that continuing the

complaints‑led approach through our campaign is inadequate.

“This feedback rests on a view that… anything less than all PPI consumers receiving redress is a failure of our approach. We do not share this view or consider it accurate.”

With the regulator apparently comfortable for some consumers to miss out they decided that forcing the banks to write to 5.5m customers who had previously had a complaint rejected, telling them they may now have a claim after all, was enough of a proactive exercise.

Incidentally this meant an earlier cut off point for those customers who received letters, much sooner than the August 2019 industry-wide deadline.

In their March 2017 deadline consultation the FCA said ‘firms are currently upholding, on average, around 80% of PPI complaints in cases where the consumer held PPI’.

Rather than acknowledge that this suggests 4 in 5 PPI policies were mis-sold, the regulator in fact said that increasing uphold rates suggested banks’ complaints procedures were improving.

They continued: “We think that firms will face further considerable redress and administration costs during the communications campaign and in the period up to the deadline… Therefore, we do not see that it is reasonable to say that we are bringing the issue to a premature close or inappropriately rewarding firms for poor conduct.”

If lenders see any kind of return on their misleading sales practices, let alone a £9bn return, then many would disagree.

How can this situation be prevented then?

Put simply – more people need to be checking their finances for PPI and finding out if they were mis-sold.

There are just 9 months left to do that, with August’s deadline representing a final cut-off point for all new claims.

Once this time passes there will be no exceptions, and anyone who hasn’t checked will never know if they were a victim of the scandal or not – even if they were indeed mis-sold and never knew.

Complaints are predicted to increase furthermore in the run up to the deadline - the question is whether everyone who should be checking will do so in time.

95%* of our successful customers at The Fair Trade Practice were unsure if they had PPI before they checked with us. What if you’re the same?

If you find you were not one of the millions affected then you will have gained peace of mind and won’t be out of pocket**, so there really is nothing to lose.

Do the right thing and start investigating your finances today.