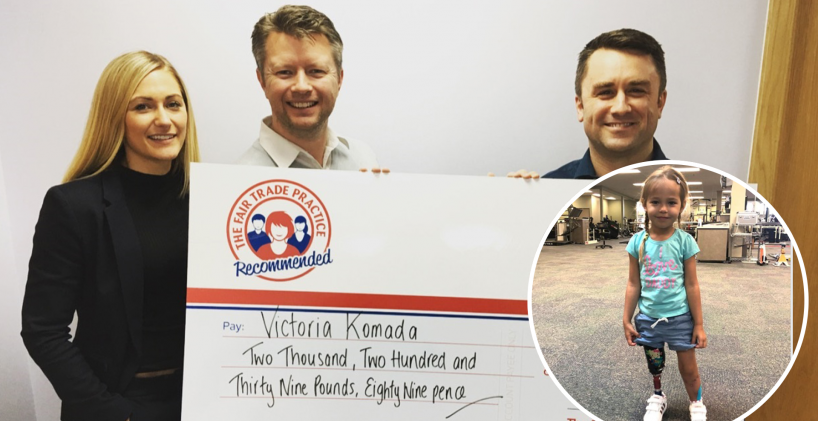 Victoria takes her first steps to a new future

Everyone at The Fair Trade Practice was delighted to see recent pictures of Victoria Komada on her way to a brighter future, having followed her story with interest for the past two years.

Born with an extremely rare birth condition called bilateral Tibial Hemimelia, where vital bones in the legs are not properly formed, three-year-old Victoria’s story was seen on social media by one of our company directors.

The overall fundraising effort raised £180,000 to help Victoria get life-changing surgery in the US, where surgeons reconstructed her left leg and fitted a prosthetic right leg.

Now Victoria has not only taken her first steps but is able to play sports, has completed a 5k walk and is due to start school later this year.

Only available at the Paley Institute in Florida USA, the surgery would have cost a staggering £300,000 for both legs to have been reconstructed.

The procedure works by stretching one of the bones in the leg and straightening the foot, with a supportive frame fitted following the procedure.

In total Victoria underwent 14 hours of surgery, her most recent of which was in November when she amazed doctors by walking just two days after the procedure.

As if coping with Victoria’s one-in-a-million condition wasn’t enough for her family, their fundraising hopes had setbacks along the way including a collection pot being stolen.

It was actually this news back in March of 2017 which caught the eye of our Director, and once our brilliant staff members heard of Victoria’s story they dug deep and took part in some truly selfless acts both as teams and individuals.

We’re so pleased for Victoria and her family that they have had such good news, and are incredibly proud to have played our part in helping to make it possible.

We wish them all the best of luck not only with Victoria’s rehabilitation but also for a healthy, happy future together.